The Switzerland County Pacer boy varsity basketball team used a strong third quarter on Friday night to pull away from rival Rising Sun, ultimately claiming a 59-41 victory for the team’s first win of the season.

The third period was the turning point of the closely fought contest, as Switzerland County outscored the Shiners15-4 to move a five point halftime lead to a 16-bulge at the end of the third, 45-29.

The Pacers got off to a quick start in the loud Shiner gym, with Damian Breeck connecting on a three-pointer; but Rising Sun fought back with baskets by T.J. Manifold and Nick Koons to grab the lead. That didn’t last long, as Dalton Tingle scored; and that was trumped by a Shiner bucket from Landon Cole. The back and forth continued, as Landon Wilks scored to retake the lead, only to see Jacob Bovard take it right back for Rising Sun.

Another Tingle bucket pushed Switzerland County back in front; but Bovard hit a three-pointer moments later. When Zach Weaver grabbed an offensive rebound and made the put back on the next trip for the Pacers, the game was tied at 11-11 with 2:20 to go.

Weaver’s bucket fueled a Pacer run, as Breeck scored again off of an assist from Tingle; Tingle followed that with a three-pointer; and Breeck then converted a steal into a layup, and with 1:30 left in an exciting first quarter, the Pacers led 18-11.

Cole then made a steal and converted a layup for Rising Sun, and the opening period ended with the Pacers in front by five, 18-13.

Freethrow shooting has been the thorn in Switzerland County’s side early in the season, but on Friday night that issue began to disappear, as the Pacers opened the second stanza with four straight made freethrows — two by Tingle and two by Breeck — to extend the lead to nine.

Rising Sun then made a run, getting two baskets by Koons and a bucket inside by Maniford to draw back within three, 22-19, at the 4:42 mark.

Tingle scored again to stop the Shiner run; and after Noah Pflum scored for Rising Sun, Tyler Konkle made a freethrow to make the lead four. Koons scored again; but Breeck drilled a key three-pointer with a minute left to again give the Pacers some breathing room.

Pflum scored again for Rising Sun; but Breeck connected in the closing seconds, and the teams went to the halftime break with Switzerland County holding a five point lead, 30-25.

The critical third quarter started off calmly enough, as Konkle scored inside and that basket was followed by a bucket from Pflum at the 6:32 mark.

But after that the Shiner offense went cold, as a stingy Pacer defense resulted in turnovers and ill-advised shots. 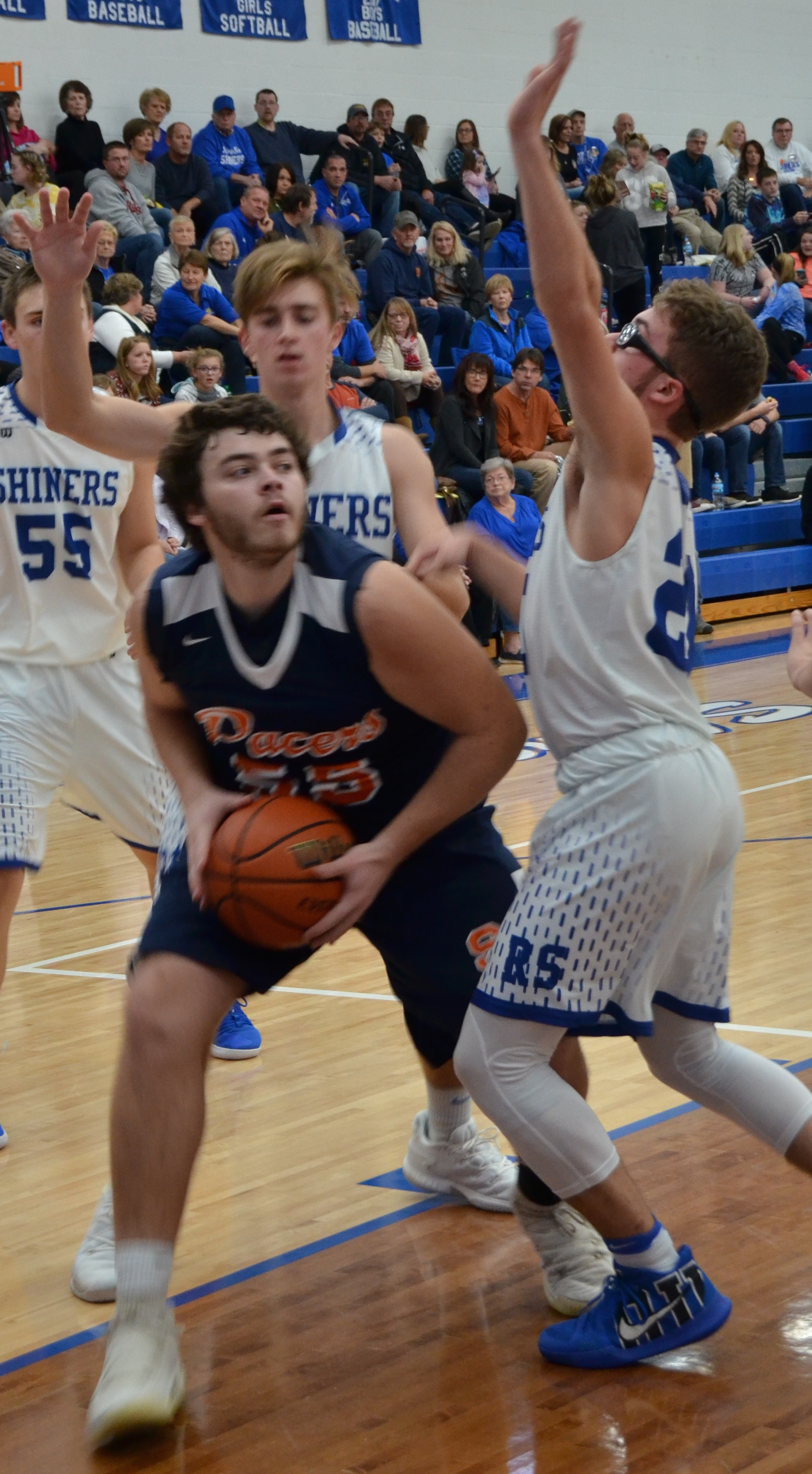 The Pacers, meanwhile, got two freethrows from Breeck; a freethrow from Wilks; and a basket by Konkle before Manifold scored for the Shiners at the 3:41 mark to make the score 37-29.

It would be the last basket Rising Sun would score in the period.

Tingle hit a basket; Konkle hit two freethrows; Wilks scored on a streak to the bucket; and Patrick Stow ended the quarter and the run with a short jumper; and after three periods, Switzerland County had blown the game open, 45-29.

In the final period, Rising Sun got back on track offensively as Chris Browne hit a three-pointer. Stow followed that with a field goal; and Bovard matched that with a basket. When Pflum scored again at the 6:17 mark, Rising Sun had gotten back within 11, 47-36.

Coach Adam Dennis’s Pacers then went on another run, getting back to back three-point plays from Konkle and Tingle to extend the lead back to 17; and after Manifold scored for the Shiners; back to back baskets by Konkle and Breeck swelled the lead up to 19. After Pflum scored again, Konkle grabbed an offensive rebound and made the put back — making it 13 second half points for the Pacer senior center — and that officially put the game out of reach.

The game ended on a somewhat scary moment, as Koons drove down the baseline and was cut off by Konkle, resulting in a nasty spill and injured Koons. He was unable to shoot his freethrows, so Browne entered the game and made one of the two attempts — and that closed out the scoring, as Switzerland County maintained possession of the “Ruler of the River” trophy with a 59-41 win.

Switzerland County’s offensive prowess has been on display in recent games, and it again showed on Friday, as Breeck led the way with 18 points, three rebounds, and two assists.

Pflum was the lone Shiner in double figures, finishing with 10 points; while Koons and Manifold each added eight. Bovard contributed seven points; and both Browne and Cole had four points each.

The win puts the Pacer record at 1-4 on the young season, and next on the docket is a home game tomorrow against Trinity Lutheran (1-6).

In the junior varsity game, Switzerland County fell to Rising Sun by a final score of 46-31.